Question: Who led the pedants’ revolt?
Answer: Which Tyler. 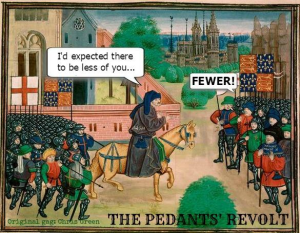 I am pedantic about the use and misuse of the English language. I know it, and laugh at myself for it, because I also know that concerns about a lowering of standards in both the written and the spoken word have been voiced ‘since time immoral’. ‘Twas ever thus.

This doesn’t stop me. I get a malicious, superior sense of enjoyment from reading Professor Pedanticus in the Guardian, I cheered Lynne Truss and I never miss an opportunity to vent my exasperation at the arch deployment of ‘my friend and I’ where actually ‘my friend and me’ would be correct.

I’m no expert. A trawl around the net on two searches (‘Pedant’s revolt‘ and ‘Pedanticus‘) turned up enough* to convince me that powerfully eloquent forces are aligned on both sides of the argument : that we should teach and insist on correctness and uniformity versus a call to relax, let the language grow new blossoms while the old wood dies. I realise I am a footsoldier in this debate. However, I am reasonably well read and well educated, and what annoys me is not so much ‘incorrect’ English in general, but incorrect usage by people or organs who should know better. The greengrocer can spray apostrophe’s around like machine-gun bullet’s as much as he like’s, it’s fun- but the BBC, for instance, shouldn’t blot its copy book.

I would say just this: in a world which is becoming exponentially clamorous via technology there must be a case for clarity of expression, for precision, for concision. Knowotimean?

Find me also at: